At least once a year, it happens that our nose starts to bother us. When mucus starts to flow from the nose (runny nose) and if it is accompanied by inflammation and swelling of the mucous membrane of the nose, soon stuffiness hits you and let us not forget the nasal congestion, sneezing,.. well than it is possible it is not just common cold but some sort of rhinitis.

What causes such a drastic response of the upper respiratory tract? The most common causes of rhinitis are colds and seasonal allergy.

The unpleasant symptoms of runny nose, sneezing and stuffiness can really make our lives difficult. Rhinitis can be allergic or nonallergic. Nonallergic rhinitis is caused by a viral infection and usually the upper airways are infected. Allergic rhinitis is when allergen enter your nose and causes inflammation.  Rhinitis can also be acute or chronic. For acute rhinitis it is typical that it is triggered by a viral infection but this is not the only cause. It can also be a result of allergies, bacteria, etc. Chronic rhinitis on the other hand it is a long standing health problem usually  with associated chronic sinusitis. It means that the nasal inflammation is long term, lasting more weeks. Chronic rhinitis can be caused by allergies and can be triggered also by medications, irritants in the air, smoking, pregnancy, asthma, chronic sinusitis. Mixed rhinitis it is a combination of allergic and non-allergic.

More common one is chronic rhinitis that is triggered by allergens. If the rhinitis in infectious (viral or bacterial), it is possible that leads to pneumonia. 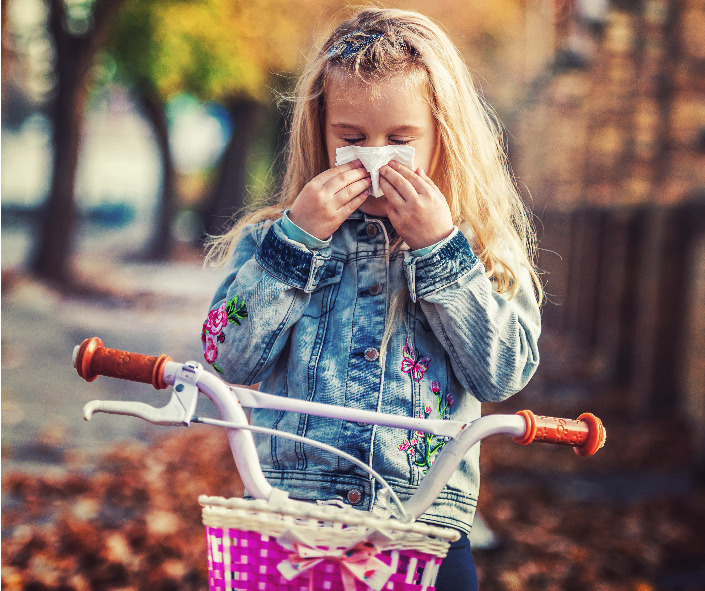 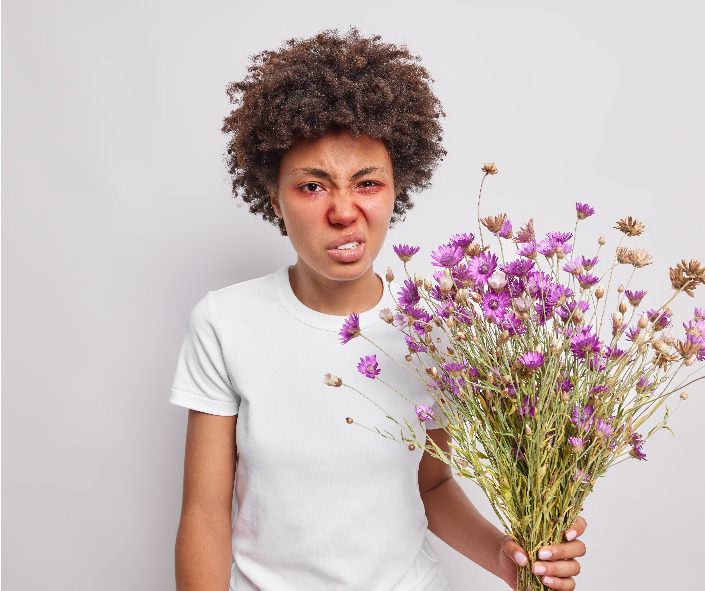 Nasal congestion is the main symptom of chronic rhinitis. The need of constantly blowing your nose all the time and only little mucus comes out is the consequence of the swelling of the nasal passages.

Allergic and chronic rhinitis can be caused by many different allergens such as:

Non-allergic rhinitis doesn’t involve the immune system. When the blood vessels in nose expand, than swelling and congestion occurs.

This type of rhinitis can be triggered by:

No specific trigger can be found in some people that are bateling persistent rhinitis. When this happens we say it is idiopathic rhinitis and it means, that there is no certain cause found.

Sometimes rhinitis is triggered by our working environment. It is called occupational rhinitis and it is a result of occupational exposures like chemicals, particles, latex, wheat flour, guar gum food processing,… Diagnosing occupational rhinitis is difficult, because often you already have diagnose either allergic or non-allergic rhinitis, but no one focuses on workplace. Occupational rhinitis can significaly impact your quality of life. It is often linked with one or more additional conditions such as occupational asthma, sinusitis, sleep disorders, eustachian tube dysfunction, headaches. So what kind of occupation are we talking about? People who work with or near animals (farm workers, veterinarians,..), agricultural workers (exposure to animals, mold spores, grains), wood industry and wood dust, latex (mostly there is inhalation of powder in latex gloves), working with glues,….

Complications of chronic rhinitis can be sinusitis and nasal polyps. Nasal polyp grows inside of your nose and when fully grown looks like a grape if there is a number of them together or only one single polyp can grow independently. Also they can grow in sinuses as well. This is very annoying because it can affect your smell or a blockage of the nose may appear, causing difficulty breathing and blockage of drainage. They are usually not cancerous swellings and are fleshy. The cause of nasal polyps is mostly not known. It could be from ongoing chronic rhinitis inflammation. Usually both nostrils are affected.

What is good to know?

When to suspect that you have nasal polyps?

You can suspect that you do not have a common cold when the symptoms last longer than 14 days and no treatment for cold helps you. Or you may need to be careful in case when your spouse is complaining of a lack of sleep because of your snoring.

Chronic rhinitis usually occurs with chronic sinusitis and those two combined it is called chronic rhinosinusitis. It is defined when at least two out of four cardinal symptoms are present:

Chronic sinusitis is a swelling of the lining of your sinuses, it is also an infection and it is also outgrowths known as nasal polyps. It means that the space inside your nose and head is inflamed, swollen. And it can hurt and be very unpleasant.

Symptoms are similar to chronic rhinitis, but there are also other signs such as:

The sinuses are a connected system of hollow empty cavities in our head. They have a thin layer of mucus. Their role it is not determined, but it is predicted that they help humidify the air we breathe in and that they enhance our voices.

Serious problems of chronic sinusitis complications may include vision problems due to spread infection to eye socket and infections such as in the bones, skin infection and inflammation of the brain membranes and fluid surrounding the brain and spinal cord (meningitis).

It lasts for at least 12 consecutive weeks and can affect anyone. Many people mistaken chronic rhinitis for persistent cold. Colds often last a week or so, while chronic rhinitis is much longer.

How to recognize the symptoms of chronic rhinitis and chronic sinusitis?

There are some ways that chronic rhinitis and chronic sinusitis can be discovered:

What are the usual treatments for chronic rhinitis and sinusitis?

There are ways that can help you treat or at lease relieve the annoying symptoms:

The power of halotherapy for chronic rhinitis and sinusitis

Of course, this is not the only study done. Somehow it is the final conclusion of all research that the main curative factors of halotherapy with dry aerosol of salt are:

For chronic rhinitis and sinusitis it is recommended to have one treatment per day for two weeks or at least 3 times per week. Treatment time is 60 minutes for adults, for children is less depending on age, development and size.

Benefits of halotherapy usually last up to 12 months; in some cases even longer.

Chronic rhinitis is mostly caused by allergens in the atmosphere, such as dust mites, pollen, dander from animals, etc.. Unfortunately, there is no cure for chronic rhinitis, however, symptoms can be treated with medications or, for those looking for a more natural remedy, sal therapy.

What are the symptoms of chronic rhinitis?

Chronic rhinitis manifests itself as a combination of symptoms, such as a runny nose, itching, often sneezing, a stuffy nose and difficulty breathing. The symptoms may very in intensity, depending on the cause and intensity of treatment.

How can halotherapy help with chronic rhinitis?

Chronic rhinitis primarily causes respiratory issues, such as difficulty breathing, runny nose etc. and is mostly caused by an allergic reaction to air particles (pollen, dust mites). A halogenerator uses salt therapy or halotherapy to clear the air and the lungs of any pathogens, thus reducing symptoms.